Shorinji-Ryu Karate is a powerful martial art, with its origins traced back from Okinawa to the Shaolin Temple. Contrary to many modern Karate systems that use muscular tension and external strength, this one focuses on the idea of soft technique, explosiveness, and the expression of Ki for its power. Refined into very complete, well rounded fighting art, Shorinji-Ryu Karate maintains its fighting prowess, discipline, and elegance through an intensive training curriculum. Combined with the approach of adaptability and innovation as its principals, this fully trains the practitioner to be a well-rounded Generalist. 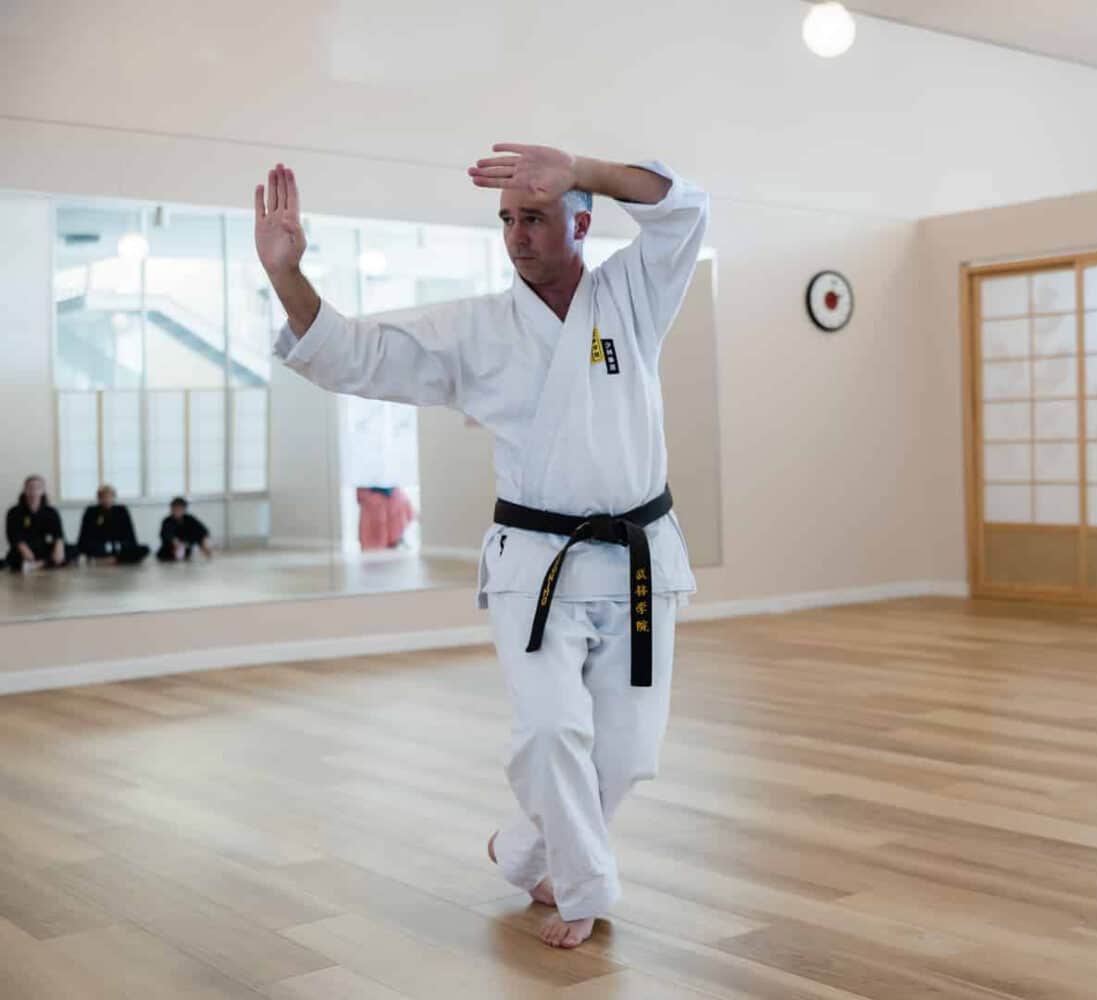 Kata, or Form, is essential to understanding Karate as a fully functional and alive art form. Taught properly at The Martial Arts Academy, Kata is fully explained in a way that many large commercial dojos and other schools fall short. Each technique is learned thoroughly, with the underlying principles of body dynamics, coordination, power generation, movement quality, and proper fighting spirit are clearly shown in a step by step fashion. 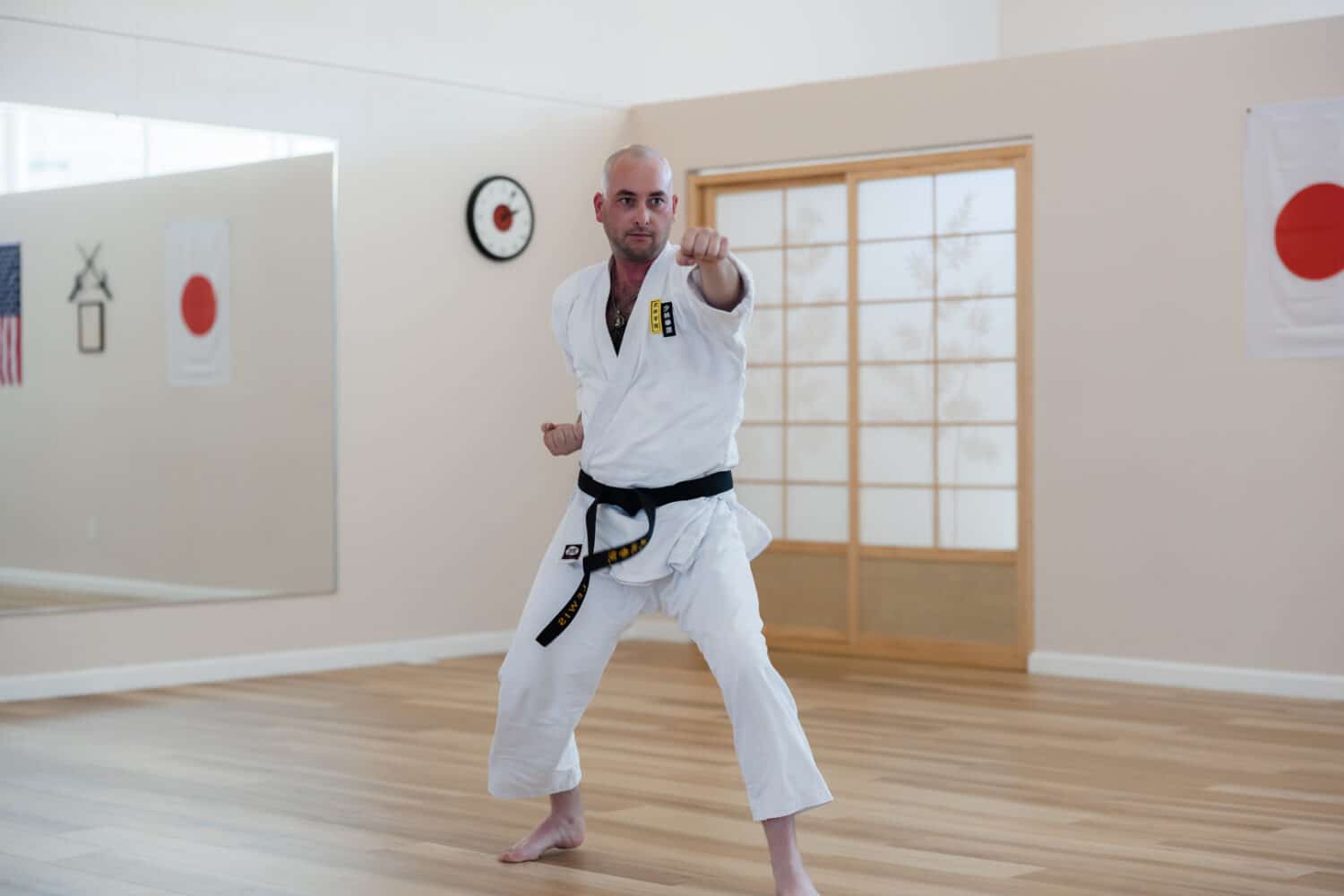 A sound foundation in the basics form dependable fighting techniques that will not fail you under pressure. Rigorous basic training in hand and leg techniques performed from horse stance, and moving line sets develops proper footwork, timing, and superior leg strength. ​Proven over centuries, The ability and strength of the practitioner is always shown through knowledge of the basics, and most importantly, Kata. Many so-called great masters that only specialized in fancy techniques have fallen in combat to those whom possess the ability of the basics and fighting spirit of the Kata. 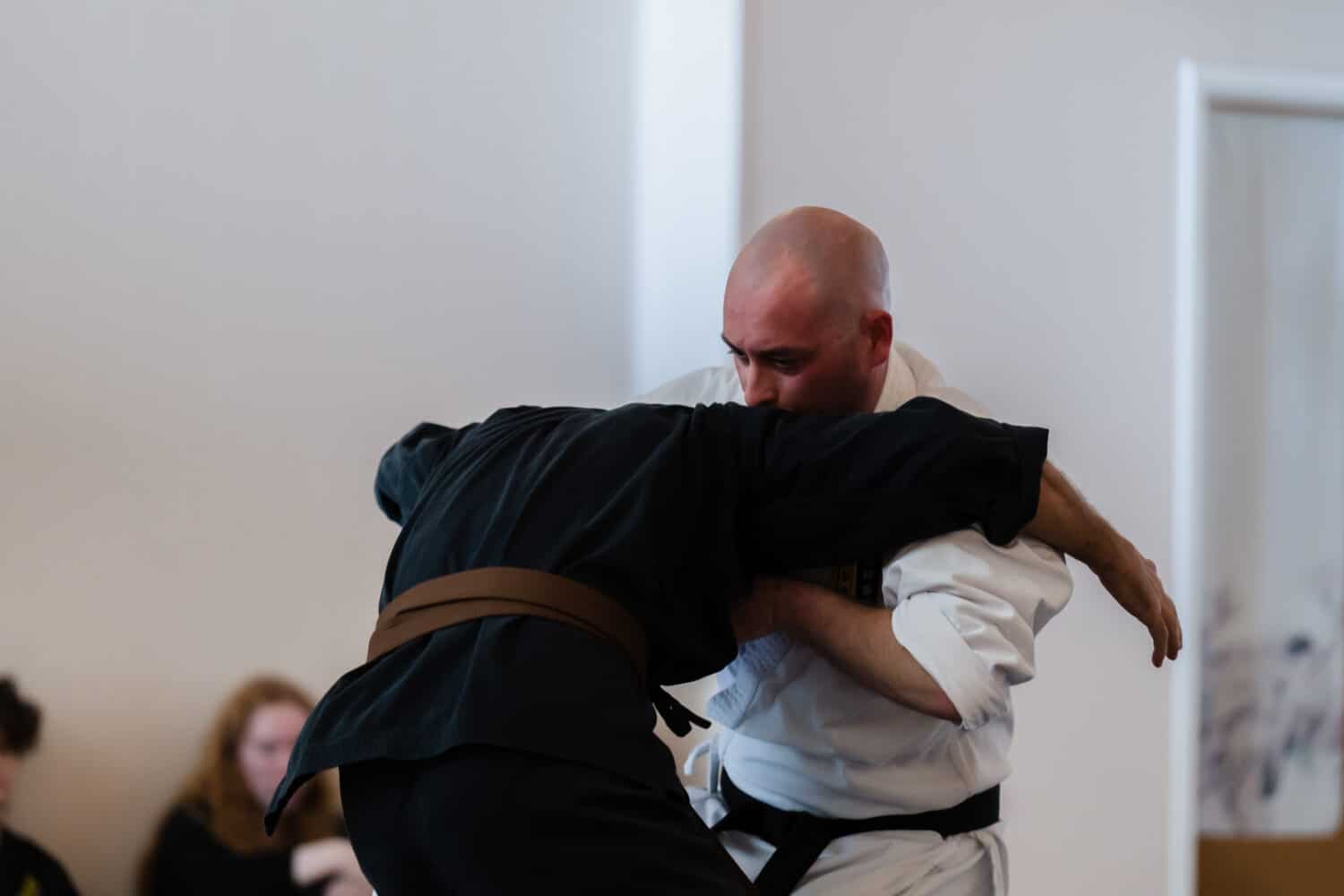 Next, Bunkai (Fighting Drills) are also practiced, in a staged curriculum: first against a cooperative training partner in order to fully understand the sequence of techniques, second against a semi-cooperative partner, and thirdly, you must perform your Bunkai against a non-cooperative partner that fully resists you each step of the way, Even the most simple of techniques become very difficult to do well. This time proven method hones your technique into a usable skill set that will benefit even the seasoned martial artist. ​Lastly you will have the opportunity to apply your techniques, in full power Jiyu Kumite to test what you have learned. 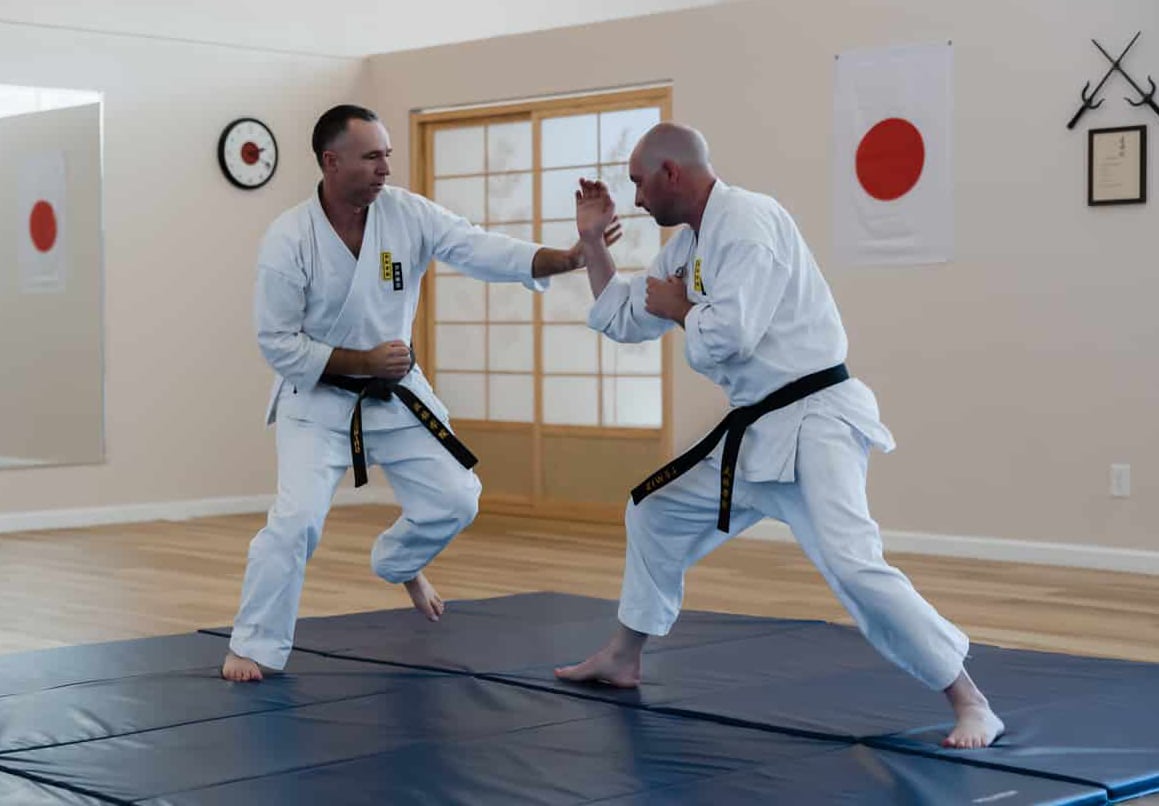 At the end of class, a Zen philosophy dissertation is given on the theme of the class that day. Learning how to improve one’s character through self examination and scrutiny is emphasized, followed by a classical Shugendo meditation tradition done to self-reflect and rejuvenate the mind and body. 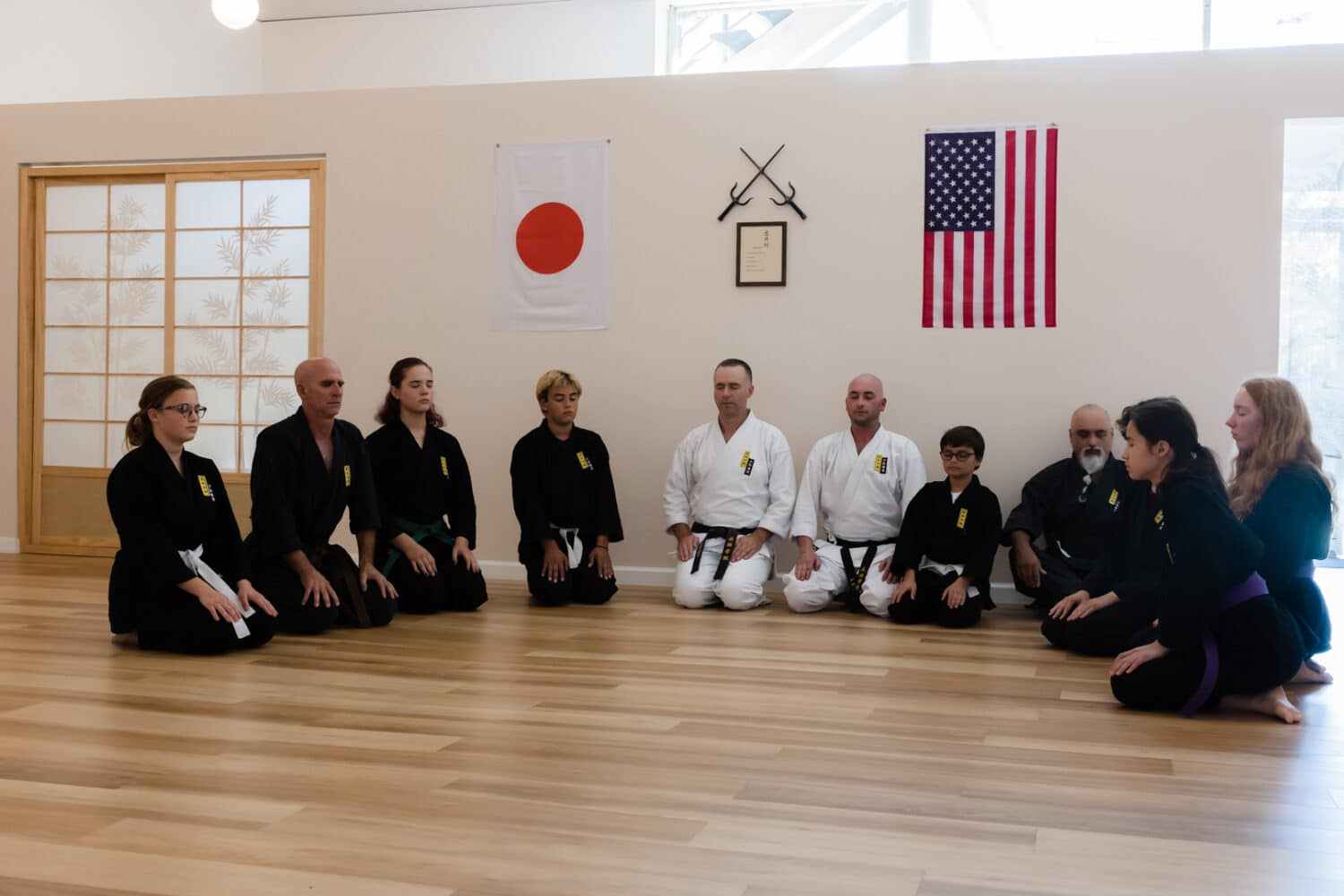 Nothing prepares you for any life circumstances like Karate or Martial Arts training. There is no college or specialty degree that even comes close, and your discipline will serve you at all stages of your life. More than just fitness and self defense, it offers a complete education beyond that, including diet, rejuvenation, psychology of the Martial Arts, physics and leverage via body movement, body language study, etiquette, history, cultural studies and more. All of these things add up to years of robust physical and mental health well into old age, and you build camaraderie with your classmates like no other experience. This in itself lends to a healthier community as a whole, and fulfills Karate’s original charter as being an auxiliary to Justice. 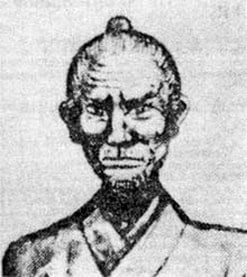 Sokon Matsumura (1809-1899) was a pivotal Karateka. A student of one of the most important forebears of early Karate, Kanga Sakugawa. Sokon is historically known to have fought in many duels, holding the distinction of never being defeated. He was described by his disciple Itosu Anko as blindingly fast and deceptively strong, and by the great Gichin Funakoshi as having piercing eyes with a “terrifying presence”.

Matsumura spent time being educated by the Satsuma Clan in Japan in sword and Bo techniques as well, bringing them back with him to Okinawa. He was also honored with the title of Bushi (Samurai), a significant achievement, and went on to serve three Okinawan Kings Sho Ko, Sho Iku, and Sho Tai as Chief Martial Arts Instructor and Bodyguard, respectively

Later in his life, he spent a great deal of time systematizing and refining Tode, the original name of Karate meaning “China Hand”. By the time he was finished, the art, while much of it’s early structure was based in Shaolin Kung Fu, had become totally of it’s own, and eventually would be christened with the new title of Karate, or “Empty Hand” in the early 20th Century. He went on to teach several highly skilled Karate practitioners such as Itosu Anko, Yabu Kentsu, and Gichin Funakoshi. 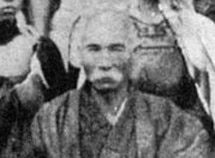 Itosu Anko (1831-1915) Itosu Sensei was a very powerful martial artist whom learned under the tutelage of Sokon Matsumura. Well into his seventies, he successfully defended the reputation of Karate in a challenge match by defeating one of Kano Sensei’s best Judo fighters, knocking him out with a single punch to the body. In 1905, Itosu achieved Satori, and created the Pinan series of Katas. They were simplified short forms based on the older Katas, making Karate much easier to teach publicly vs. the older training “3 years per Kata” methodology. Because of this innovation, Karate was also standardized along Judo throughout the Japanese Empire. While he was a senior student to Gichin Funakoshi and Yabu Kentsu, he did have a strong influence on their training and all of Shorin-Ryu Karate. 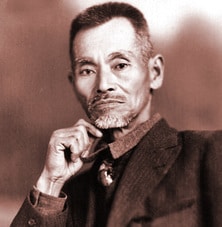 Kentsu Yabu (1866-1937) Sensei Kentsu was a prominent teacher of Shorinji-ryu Karate in Okinawa. Yabu put his skills to the ultimate test when he fought in the Sino-Japanese war, perfecting his art on the battlefield. His teachers included both Matsumura Sokon and Itosu Anko, and was among the first people to demonstrate Karate in Hawaii during the 1920s. A young Richard Kim had attended these demonstrations, and joined the class under the instruction of Yabu, and later Arakaki Ankichi. His experiences in real life combat battle hardened him, and he defeated any challengers, including the mighty Choki Motobu. He was a stickler for the basics and preferred the training and fighting techniques of Nihanchi and Gojushiho Katas. 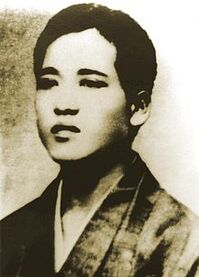 Arakaki Ankichi ​(1899-1929) Richard Kim’s second Karate teacher, Ankichi Sensei  is notable for aiding in the evolution of Shorin-Ryu Karate. He was extremely important in the education of Shōshin Nagamine, who later went on to found Matsubayashi-ryū karate. Having full support from his family to do so, he focused on training daily for most of his life. He was known for his intense strength, and had a devastating tsumasaki-geri (toe strike). Sadly, he succumbed to stomach ulcers and died at a very young age.

Richard Kim (1917–2001) Widely considered to be the best martial artist of the 20th Century, Sensei Kim was a master instructor. When he was a child, he began his training in Judo, and later, Shorinji-ryu Karate under Yabu Kentsu and Arakaki Ankichi. Before World War II, his service in the US merchant marines took him to east Asia. While there, he trained in Taiji Quan with Chen Chen Yuan, I-Quan with Wang Xiang Zhai, and Bagua Zhang with Chao Hsu Lai.
After the war, he moved to Japan. He studied Daito-Ryu Jujitsu under Kotaro Yoshida and lived with him for seven years. Yoshida fully instructed him in his system, and imparted to Kim a wealth of martial arts philosophy and Shugendo spiritual training. In 1959, Kim began teaching martial arts in San Francisco. He taught extensively throughout the United States, Canada, and Europe. He had many great students, including Will Yturriaga’s teacher, Sensei Samarrai to whom he taught his entire system, including the full Shugendo spiritual tradition.

Want to learn more about our programs?

Sign up today to receive news on up and coming programs and schedule updates!